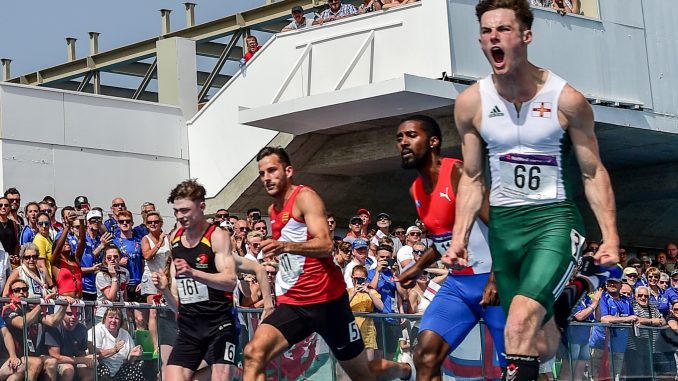 Joe Chadwick roars as he crosses the line in the 100 metres (Credit: David Parody)

Guernsey athlete Joe Chadwick took home the gold medal from the showpiece event of the week at Gibraltar’s Lathbury Sports Complex – the 100 metres.

Chadwick’s official time across the line was a personal best of 10.82.

He won his heat and his semi final before finishing ahead of Cayman Islands’ Jeavhon Jackson and Tyler Johnson of Jersey in the final.

Speeds were up in general in the final, the wind level standing at just +0.5, but Chadwick was still delighted with his win and time.

The Guernsey man said: “The start wasn’t what I’ve putting together through the competition.

“That’s been my main asset of the race and it definitely wasn’t tonight.

“I couldn’t compose myself over the line, I really couldn’t.

“I’m still very happy with the time – I don’t know what the wind is but it’s a PB for me and I’m very happy.”

"I'm just really happy to do my bit for the island."

Guernsey have been a major force as an island not just in the athletics throughout this Island Games, but in other sports as well.

Chadwick added: “We have some really strong athletes.

“To do my part in the Island Games, such a big part of our athletics season, I’m happy I could bring it home.

“Guernsey is such a great place and I’m really happy to do my bit for the island.”

Joe Chadwick said his start “wasn’t what I’ve been putting together throughout the tournament” (Credit: William Gracia)

And Chadwick said of those events: “I’ve still got to cool down so there’s no slacking tonight.

“Tomorrow night at the closing ceremony it should be fun.”