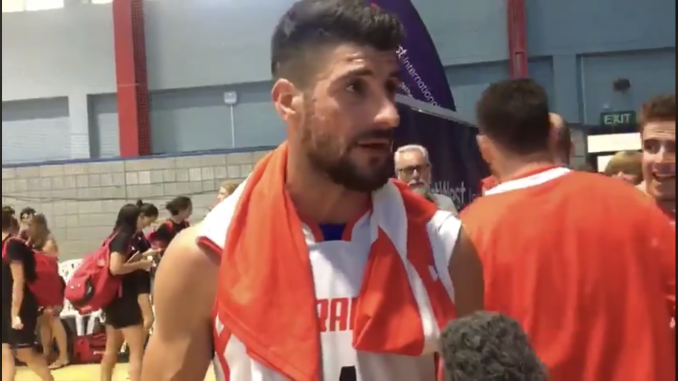 By Jonathan11th July 2019 No Comments
Back to News

Team Gibraltar’s Jamie Sercombe is confident of making the Men’s Basketball Final after a crushing quarter-final win over Jersey.

With the scoreline finishing 78-35 to the hosts, it was a comfortable passage into the last four where they will face Saaremaa.

Both have won every game up until this stage, but one perfect record will be ruined come Thursday evening.

Gibraltar progressed through the groups with ease, beating Menorca and Gotland convincingly.

And after seeing off Jersey, Sercombe is now focused on progressing into Friday’s final.

“We came into the game against Jersey knowing it wasn’t going to be like playing Cayman or Saaremaa,” he said. “Now we’re looking forward to cracking on to the Semi-Final.”

Sercombe and his team mates were quick out of the blocks and got themselves off to a flyer, their intensity proving too much for Jersey.

He said: “It is hard keeping the intensity at that level, rotating the bench too, when you’re playing a team that isn’t at the same standard.

“It can be mentally tough to be at the level you want to be for the whole game.”

The hosts were roared on by an electric home crowd inside Tercentenary Hall.

Sercombe was full of praise for the backing from the stands and knows how big of a part they play.

He praised: “The fans are almost on the court too.

“It’s a home advantage, we treasure it and it’ll certainly be a big plus for us in the semis and, hopefully, the final if we get there.”