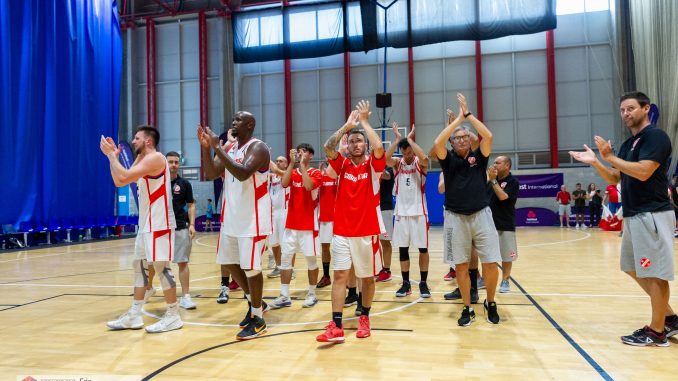 Adam Cassaglia rued his team’s offensive play and decision making as Gibraltar were narrowly beaten 64-60 by Saaremaa in a fervent atmosphere at the Tercentenary Hall.

The home side were trailing for most of the Island Games semi-final and just couldn’t peg their opponents back.

The coach thought his side’s attack was ‘stagnant when moving forward’ and their decision making and shot selection was ‘bad’.

Gibraltar now have to lift themselves for a third place play-off match against Guernsey as they aim to secure a medal for the third successive Island Games.

Cassaglia also thought the referee was harsh on his side, allowing too much physical contact.

He said: ”It would’ve been nice to have got a couple of calls in our favour towards the end.

”I think the referee allowed the physical play towards the end and it was to our disadvantage.”

The 41-year-old praised the fans who roared his team on during the four quarters – and he wants the same against Guernsey.

He said: ”It was buzzing in there, it was a really good atmosphere. The home crowd has really helped and tomorrow we need them because it’s an important medal match.

”A bronze medal for us is a huge accomplishment, we’ve only ever won two medals in the men’s tournament so winning another would be a huge plus.”