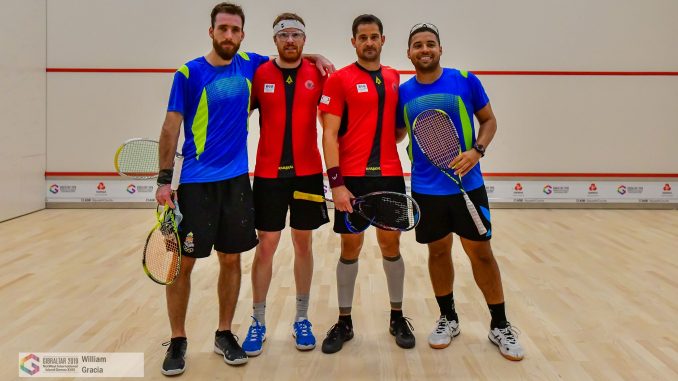 By Jonathan11th July 2019 No Comments
Back to News

The Cayman Islands pair of Jake Kelly and Julian Jervis spoke of their pride after capturing one of their island’s eight Games gold medals by winning the men’s doubles squash final.Kelly and Jervis beat the Gibraltar pairing of Anthony Brindle – who is seeded second in the singles tournament – and Christian Navas 15-13, 15-11.

After a closely contested first set, the second was slightly more straightforward in terms of the score although equally as competitive.

The island then picked up golds in the mixed doubles and women’s doubles squash to take their tally up to eight for the Games (five from squash).

Kelly said of the win: “It went well, we just kept steady which was the main thing.

“This is my first true gold medal at the Island Games so I’m super happy.

“I don’t know how to put it into words.”

One of the more interesting conundrums the squash has thrown up is the differing amounts of practice time between pairings, and the new 15 point scoring system that is in place.

Jervis said of the challenges they face: “Our main problem usually in training is keeping it steady and focused the entire way through, especially with the new 15 point scoring setting.

“I’m just happy it all came together today.

“We were focused and I think the crowd enjoyed it.”

Cayman Islands have dominated the squash scene in Gibraltar, winning all five of the available golds up to this point.

They go for the sixth – the team event – today, having thrashed Isle of Man 5-0 in their opening group game.

The games are played over three men’s singles and two ladies’ singles, all over two sets.

And Jervis praised his fellow competitors: “They’re excited, we’re all here for each other. We’re almost like a little family.

“We’re just about to go and cheer the others on now.

“There’s a great atmosphere in this little team.”