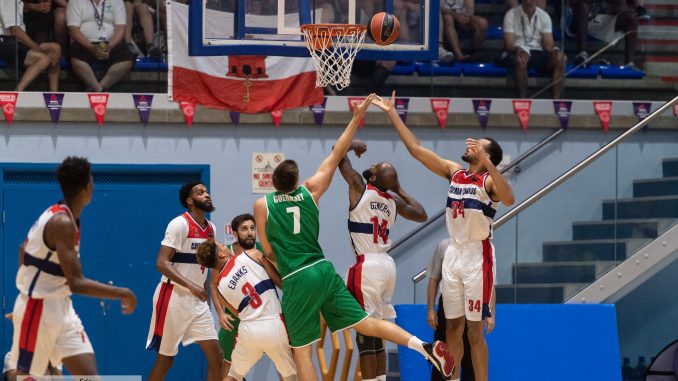 On the final day of competition in the 2019 NatWest Island Games in Gibraltar, the Cayman Islands will aim to retain their men’s basketball crown from 2017.

Having made it five wins out of five with a crushing display against Guernsey in Thursday’s Semi-Final, Saaremaa now stand in their way of back-to-back gold medals.

Cayman ran out 103-66 winners in the last four stage, showing extraordinary levels of fitness and flair.

Coming into the competition as hot favourites, Cayman’s De’Andre Simpson admitted he and his team mates felt a little bit of pressure on their shoulders.

“There was a little bit of pressure,” he said. “To show that we can repeat it and it wasn’t just a fluke.

“So there was a bit but we’re taking it and we’re handling it.”

There’s no feeling quite like winning your first gold medal, but Simpson assured that to do it again and preserve their champion status would be a special feeling.

“It was amazing, being our first time winning gold” he said. “The closest we’d came was silver and that was a long time ago in the nineties.

“Gotland was our first time and now we just have to defend our title.”

In the other Semi-Final Saaremaa played the role of party poopers, as they dumped out hosts Gibraltar in a narrow 64-60 contest.

Had Gibraltar won, it would’ve been a repeat of the 2017 final – a match Simpson was hoping he’d have the chance to relive.

Speaking before Gibraltar’s defeat, Simpson said: “We would prefer Gibraltar, they have a nice crowd and we’d like to silence them a bit.

“But honestly we don’t care who we face in the final, we’ve faced both teams in Gotland and defeated them both.

“I’m pretty sure neither of them want to see us in the final, I don’t think they’re ready for it.”