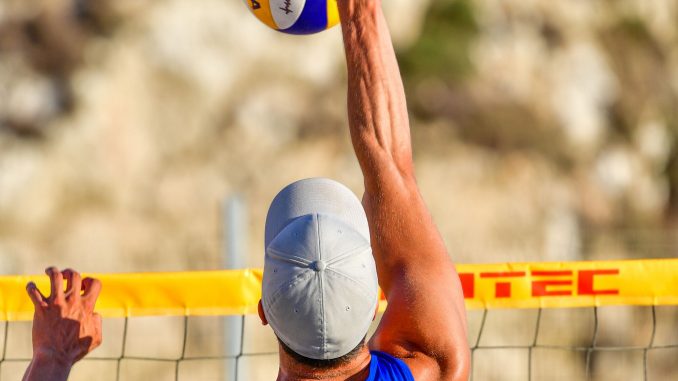 Åland’s men win ‘Battle of the Baltics’ in beach volleyball

Åland’s duo of Aldis Jaundzeikars and Verneri Veteriö won in straight sets to take the gold in the men’s beach volleyball final at the Island Games.Winning both sets 21-18, the pair sealed Åland’s eighth gold medal of the games in front of their jubilant supporters on a boiling hot evening at Camp Bay, Gibraltar. Prior to the men’s final it was Gotland who were crowned winners in the women’s, meaning the double was on for the Swedish Island.Jaundzeikars and Veteriö had other ideas though and they gatecrashed the party to take their first ever gold in the event.They deservedly won the first set but they had to show fight and resolve in the second, having trailed for the majority of it. But when a well placed shot from Veteriö proved too difficult to return, the win was sealed to the joy of the jubilant Åland supporters who made themselves heard all game.Speaking after the triumph, Jaundzeikars said: “Of course it’s a great feeling, being the first time in Island Games beach volleyball – we’re super happy.”

Having won every game up until the final you’d assume confidence was sky high, but Veteriö admitted he wasn’t 100% ahead of the final and that the fans helped them massively. “We were so and so,” he said. “We started off pretty badly, but our game just got better throughout the tournament and Aldis played brilliant in the last two games. “The fans always, always help – playing in a full arena in front of them is the best feeling in the world.” Gotland were certainly on course to level the game and take it to a final set, but Jaundzeikars knew he and his team mate just had to keep believing. “We keep playing our game,” he said. “We tried to cut out the easy mistakes because they were playing good. “You saw the way they kept the ball up and got it over, so we had to try really hard to keep playing and win the points.”As mentioned, in the women’s beach volleyball, Gotland’s Sofia Uddin and Sofia Wahlen were victorious over Menorca in straight sets. The first set was closely fought throughout, Gotland taking it 21 points to 16.Gotland really began to show their class in the second, however, and eased to a 21-7 win to take the gold.

"I can't describe this feeling."

Understandably pleased after the win, Uddin said: “It’s so good. “I can’t believe this feeling – it’s amazing.” Apart from losing their final group game 2-0 against the Cayman Islands pair, Uddin and Wahlen won all five of their other matches without dropping a set. And Wahlen believed that momentum played its part in their win. She said: “We had some momentum since the quarter final and it’s just been rolling our way.” “We played a really stable game in the final. “The reception was fantastic all the way through and we had some really good serves and points.”

The beach volleyball arena is another designed specifically for the Island Games, and the women reserved plenty of praise for the facilities. Uddin said: “(Playing in Gibraltar) is so amazing. “The venue is so beautiful and you have the ocean, the pool and the music – with the waterfall as well, it is amazing.”